HEALING HIS MEDIC BY NANA PRAH 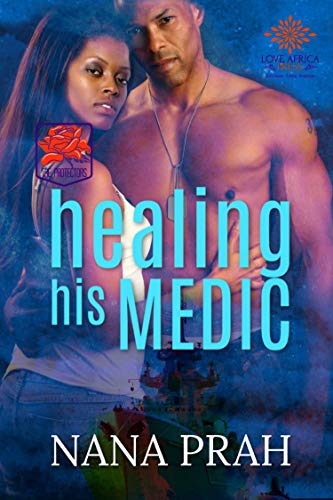 Doctor Comfort Djan is looking for salvation after a tragic accident, which takes her to deprived regions where her skills heal the helpless. Until Fate thrusts her as a medic on board a West African military coastal protection ship. Proving herself to the male-only crew is nothing compared to being near one intense naval officer who has her feeling something other than her survivor’s guilt.

Commander Akin Solarin wants nothing more than to do his job, especially when his medic’s temporary replacement turns out to be a disconcerting woman who pushes all his buttons. He runs a tight ship, and doesn’t need captivating and efficient yet aloof Comfort around to keep his heart-rate in semi-permanent overdrive.

Neither can deny the attraction between them, but navigating uncharted personal waters may be the least of their problems when confronted with bold pirate attacks and other vicious unknown dangers onboard the frigate. And when Comfort’s life gets on the line, Akin knows he will do anything to save his medic and heal her battered heart in the process.

UNRAVELLING HIS MARK BY ZEE MONODEE

A man with a mission

A year earlier, a mutiny broke inside the ranks of the clandestine Corpus Agency. Only one loose thread remains to be apprehended: an assassin named Evangeline.

When intel from an asset points to a woman in Mauritius who could be her, Zachariah Hashemi, a mixed race Muslim from Tanzania, is tasked with bringing the renegade to justice…aka a swift death.

A woman with nothing to hide

French-Mauritian PR maven Annabelle de Castelban is throwing all she has into making her communications agency a success. When an opportunity to partner with a renowned international firm knocks on her door, she jumps on it, even if it means she has to fight her attraction to the devastatingly handsome man and the sizzling chemistry sparking between them.

A killer with a plan

Annabelle has no idea Zach is here to determine if she is a mercenary with no remorse. And the more he gets to know her, the more it becomes obvious she cannot be this twisted assassin.

Indeed, Evangeline is near, and when Zach finds out Annabelle is the killer’s latest target, he will stop at nothing to protect the woman he has in the meantime fallen in love with.

As they race against the clock, will they both be able to thwart the psychopath’s plan to kill them in the most devious way?

EXCERPT FROM UNRAVELLING HIS MARK BY ZEE MONODEE 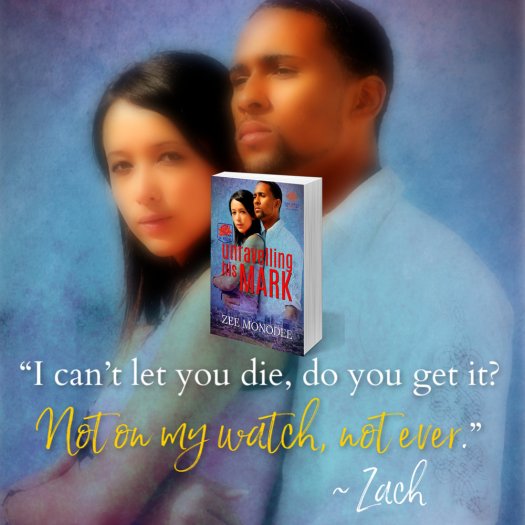 “It’s not good, patronne. The model who was to have the showstopper bride on his arm ate some of the prawn cocktail. He is currently puking his guts out in the guest loo at the back.”

“Thank God he made it to the loo and didn’t barf on any of the clothes.”

Trust her problem-solving mind to come up with the silver lining in every situation. But seriously, if any of the gowns had been ruined, Nina would’ve had her hide. All the pieces had thousands of pearls or Swarovski crystals hand-sewn on them.

“So the only problem we have right now is that we need an escort for the showstopper.”

whispered with a glance towards a still-raving Nina.

“Her, we can deal with, and it will sort itself out once we find a replacement for the sick model.”

Daniel snorted. “Good luck with that. Have you forgotten the brief she forced down the throat of every modelling agency on the island? The man had to be buff and—”

“Taller than six-foot-two. I know.”

Good luck finding a six-foot man at random on the island in the first place, and now on such short notice? They had their work cut out for her.

Still, there were some foreigners in the audience. There must be one about six-two and muscular. What had Nina written on the call sheet? She’d wanted ‘a tall drink of water.’

So, armed with optimism and determination, Annabelle strutted back into the main room, a smile plastered on her face as she eyed every single man around. Just her luck. None seemed taller than six feet, and they all looked like guys whose only attempt at exercise came from a leisurely stroll once a month along a putting green.

Her spirits were sinking fast, but no, she wouldn’t be the victim. She would turn this around one way or another. If she couldn’t find— Her shoulder collided into someone, and reflex made her look up and say, “Oh, pardon.”

But the apology died on her lips as her gaze raked over the hulking piece of masculinity she’d bumped into. He was tall, all right. Comfortably above six-two, she’d say, with the frame to match. Those broad, broad shoulders looked snug inside the clean lines of an obviously expensive hand-tailored suit the shade of a rare Dom Pérignon millésime. His skin was the colour of sugar when it had just started to turn into caramel, a golden glow on his chiselled features and cheekbones so sharp and defined, it was ridiculous. His head was shaved, and his eyes were dark. Smouldering. Intense. A thin goatee that looked like it had been hand-drawn onto him framed his solid chin and gave bearing to his strong jaw.

A puff of air escaped her.

“Tall drink of water,” she mumbled, and blinked.

The gears of her stunned mind started clicking then, and she gasped. “Tall drink of water!”

I was raised in the US and currently reside in Ghana. I have been writing ever since I can remember (in my journal) and have been an avid reader of romance novels since the eighth grade. I have finally been able to utilize the years of inadvertent research into writing my own romance novels where love always conquers all.

From always choosing the storytelling option in English & French classes to sneaking a Mills&Boon romance under the desk at school, Zee went on to make a career out of writing the kind of emotional romances all young girls junk on.

Of Indian heritage & a 2x breast cancer survivor, Zee lives in paradise (aka Mauritius!) with her long-suffering husband, their smart-mouth teenage son, and their tabby cat who thinks herself a fearsome feline from the nearby African Serengeti plains. When she isn’t in her kitchen rolling out chapattis or baking cakes while singing along to the latest pop hit topping the charts, she can be found reading or catching up on her numerous TV show addictions. In her day job, she is an editor who helps other authors like her hone their works and craft.